Dr. Weeks’ Comment: We see that the bees operate within an electrical field.  Many of us suspect that colony collapse is related to electromagnetic pollution. Stay tuned to learn more about how this environmental pollutant effects the hard working bees!

Christina Sarich
Published: Friday 3 May 2013
http://www.nationofchange.org/bioelectromagnetics-bees-and-flowers-communicate-using-electrical-fields-scientists-find-1367593609
Did you know that flowers and bees communicate with one another about the amount and quality of pollen available using bioelectromagnetics? 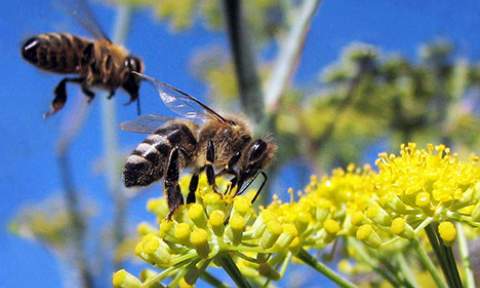 The Communication Between Bees and Flowers

In a recent study from the University of Bristol and published in Science Express, scientists put electromagnetic detectors in flowers’ pollinators to watch the great romance of spring and determine if electrical signals given off by both bee and flower aided in communication. They also watched bee behavior to observe some interesting findings.

What scientists discovered is that flowers tell bees specific information, including how much pollen they have, if another bee has visited them recently, and what type of flower they are. Flowers and bees communicate effectively to aid bees in the work they do.

Nature is probably more honest than the person you met at a bar last week or the latest update to a romantic interests’ online dating profile, because the flower ”˜knows’ that a bee won’t visit them if they don’t provide nectar or pollen, and so they use positive reinforcement through electromagnetic signals to help draw the bee in – aside from their bright colors, exotic petals and heady perfumes. They always tell the truth about what they have to offer.

Researchers at the University of Bristol also discovered that bumblebees can distinguish different types of flowers with more discernment utilizing floral electric fields. While plants are usually negatively charged, bees can build up to a 200-volt charge as they fly through the air. When they land on a flower, this electric charge helps the bee and flower ”˜talk’ to one another. This electric relationship is not entirely understood by researchers just yet, as scientists don’t’ know exactly how bees (or flowers) detect electrical fields.

Altogether, these tests suggest that the electrical fields that build up on bees due to their flight or movement are stimuli that could be used in social communication, according to the Proceedings of the Royal Society – Biological Sciences.

Bees have what are called Johnston’s organs, a special organ located at the base of their antennae, but even when antennae were removed, they could still sense an electric charge from flowers. Is our antennae akin to the pineal gland?

When bees do their ”˜waggle’ dance too, they may be communicating more than with just their physical bodies. It’s something to keep in mind the next time you are trying to woo your next mate. Perhaps your bad luck is not just your dancing after all.