Dr. Weeks’ Comment:  Eisenhower, upon leaving the office of President in 1960, cautioned the world about the military-industrial complex. Ike noted with dismay  “We annually spend on military security more than the net income of all United States corporations.”  and warned  “In the councils of government, we must guard against the acquisition of unwarranted influence, whether sought or unsought, by the militaryindustrial complex. The potential for the disastrous rise of misplaced power exists and will persist.”  Today, any doctor who is awake will admit that this warning from 1960 is certainly apropos for today’s medical industrial complex.

Today even Wikipedia unabashedly warns the consumer of health care services to beware of this conflicted process in medicine.

A most thoughtful caveat is offered by Dr. Mark Hyman when he writes:    “Your doctors think they make decisions based on medical evidence. But they don’t! In fact, half of medical evidence is hidden from your doctors. And the half that’s hidden is the half that shows drugs don’t work. The bad news is that drug companies are not policed by the Food and Drug Administration (FDA) the way they should be. A drug should be proven both effective and safe BEFORE it is prescribed to millions of people. Sadly, that often isn’t the case. Let me share with you two recent examples that highlight the dangerous collusion between drug companies and our government agency. They show why the FDA should really stand for “Federal Drug Aid. First, we now know that the cholesterol-lowering drug Zetia actually causes harm and leads to faster progression of heart disease DESPITE lowering cholesterol 58 percent when combined with Zocor. This challenges the belief that high cholesterol causes heart attacks and shakes the $40 billion dollar cholesterol drug industry at its foundation. Second, it’s come to light that nearly all the negative studies on antidepressants – that’s more than half of all studies on these drugs – were never published, giving a false sense of effectiveness of antidepressants to treat depression. Don’t get me wrong. I’m not telling you to blame your doctor. Instead, blame deceptive scientific practices and industry-protective government polices.”

For the complete article read HERE

The Right to Try is a legislative effort to allow for the use by patients and the prescribing by doctors of experimental, non-FDA approved and perhaps off-label medications when lives are on the line and no clearly beneficial or life-saving medication is offered by the standard of care. A great read is The Right To Try by Darcy Olsen who advocates for an American citizen not requiring the permission of the government to try and save his or her own life – or the life of their child. 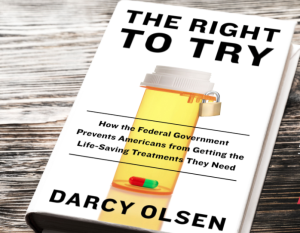 “Right to Try is filled with stories of heroism and heartbreak””of courageous Americans who beat illnesses no one thought could be defeated; parents who won the fight to get their children access to cutting-edge cures; patients who were denied life-saving treatments by the government ostensibly for their own protection; and incredible doctors and researchers pioneering revolutionary cures. Drawing on her experience fighting for patients, Darcy Olsen goes inside the federal bureaucracy that is stopping millions from accessing these lifesaving treatments, lays out the case for expanding access to experimental medicines, and describes the ongoing national campaign to change these laws state-by-state.”

Who controls YOUR health?  Who decides what medications you and your loved ones take?  If you think that the answer to these simple questions is you…. then I implore you to awaken. For example, if you live in the sunshine state, did you know that everyone – infant, child, adult elderly – everyone will be medicated even against their will?

Let’s give a doctor and a signer of the Declaration of Independence, the last word:

“The Constitution of this Republic should make special provision for medical freedom. To restrict the art of healing to one class will constitute the Bastille of medical science. All such laws are un-American and despotic. … Unless we put medical freedom into the constitution the time will come when medicine will organize into an undercover dictatorship and force people who wish doctors and treatment of their own choice to submit to only what the dictating outfit offers.”

To learn more about your Right to Try, contact the Goldwater Institute   and join champions of health care freedom this February 4th, 5th and 6th 2016 at the Cuchara Inn in Colorado for The Right to Try Conference.