Dr. Weeks’ Comment:  For more than 50 years Dr. Abram Hoffer  MD phD reversed schizophrenia by reducing the endogenous hallucinogen adrenochrome using the save nutrients  – Vitamin B3  and Vitamin C (READ ABOUT IT HERE). Since then we have determined that schizophrenia and ALL PSYCHIATRIC disorders are reduced by anti-inflammatory agents.    (READ THIS HERE)  Now great research from London shows that CBD oil helps reverse psychosis also.  Read below:

Effect of Cannabidiol on Medial Temporal, Midbrain, and Striatal Dysfunction in People at Clinical High Risk of Psychosis: A Randomized Clinical Trial.

Cannabidiol (CBD) has antipsychotic effects in humans, but how these are mediated in the brain remains unclear.

To investigate the neurocognitive mechanisms that underlie the therapeutic effects of CBD in psychosis.

In this parallel-group, double-blind, placebo-controlled randomized clinical trial conducted at the South London and Maudsley NHS Foundation Trust in London, United Kingdom, 33 antipsychotic medication-naive participants at clinical high risk (CHR) of psychosis and 19 healthy control participants were studied. Data were collected from July 2013 to October 2016 and analyzed from November 2016 to October 2017.

Cannabidiol may partially normalize alterations in parahippocampal, striatal, and midbrain function associated with the CHR state. As these regions are critical to the pathophysiology of psychosis, the influence of CBD at these sites could underlie its therapeutic effects on psychotic symptoms. 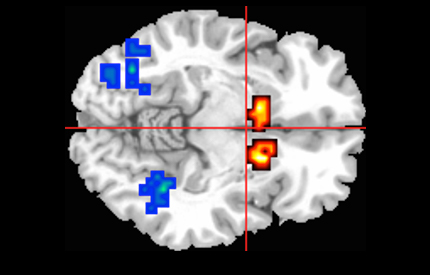 Research from King’s College London has found that a single dose of the cannabis extract cannabidiol can help reduce brain function abnormalities seen in people with psychosis. Results from a new MRC-funded trial, published in JAMA Psychiatry, provide the first evidence of how cannabidiol acts in the brain to reduce psychotic symptoms.

Cannabidiol, also referred to as CBD, is a non-intoxicating compound found in cannabis. A purified form of cannabidiol has recently been licensed in the USA as a treatment for rare childhood epilepsies, and a 2017 King’s College London trial has demonstrated cannabidiol has anti-psychotic properties.

However, exactly how cannabidiol may work in the brain to alleviate psychosis has remained a mystery.

“The mainstay of current treatment for people with psychosis are drugs that were first discovered in the 1950s and unfortunately do not work for everyone,” says Dr Sagnik Bhattacharyya, from the Institute of Psychiatry, Psychology & Neuroscience (IoPPN). “Our results have started unravelling the brain mechanisms of a new drug that works in a completely different way to traditional anti-psychotics.”

The researchers studied a group of 33 young people who had not yet been diagnosed with psychosis but who were experiencing distressing psychotic symptoms, along with 19 healthy controls. A single dose of cannabidiol was given to 16 participants while the other 17 received a placebo.

All participants were studied in an MRI scanner while performing a memory task which engages three regions of the brain known to be involved in psychosis.

The influence of cannabidiol on these three brain regions could underlie its therapeutic effects on psychotic symptoms.

Intriguingly, previous research from King’s College London shows cannabidiol appears to work in opposition to tetrahydrocannabinol (THC); the ingredient in cannabis responsible for getting users high which has been strongly linked to the development of psychosis. THC can be thought of as mimicking some of the effects of psychosis, while cannabidiol has broadly opposite neurological and behavioural effects.

Dr Bhattacharyya and colleagues at IoPPN are now launching the first large scale, multi-centre trial to investigate whether cannabidiol can be used to treat young people at high risk of developing psychosis. The trial is supported by a £1.85 million grant from an NIHR and MRC partnership.

Some estimates suggest that in England alone, over 15,000 people present with early symptoms of psychosis every year. Despite symptoms that can be extremely severe, there are currently no treatments that can be offered to patients at high risk of psychosis because current anti-psychotic drugs can have serious side-effects.

“There is an urgent need for a safe treatment for young people at risk of psychosis,” says Dr Bhattacharyya. “One of the main advantages of cannabidiol is that it is safe and seems to be very well tolerated, making it in some ways an ideal treatment. If successful, this trial will provide definitive proof of cannabidiol’s role as an antipsychotic treatment and pave the way for use in the clinic.”